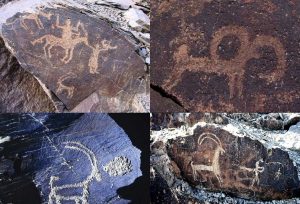 It is considerable that the history of painting in Iran goes back to the Cave Age.

The images of animals and hunting scenes have been discovered in the caves of Lorestan province which is located in west of Iran, even some of the discovered items by W. Semner on the walls of buildings in Mallyan Heights in Fars province date back to five thousand years ago. 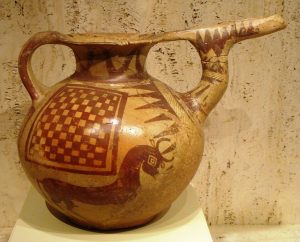 The discoveries in Lorestan, Sialk Mound in Kashan and other archeological sites prove that the artists of this land were so familiar with the art of painting.

In Achaemenid era, the artists preferred profiles. The beauty of colors used in this era are remarkable. They lack shading and have the same tonal quality. In some cases, black stripes somehow limited the colorful surfaces. 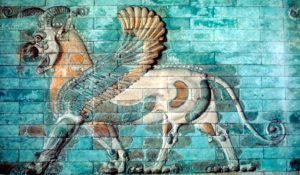 Mani, the Iranian prophet and painter, who lived about the 3rd century, was a skilled and expert painter who used to preach his ideas by his book (Arjang) which was full of paintings. His paintings were miraculous. 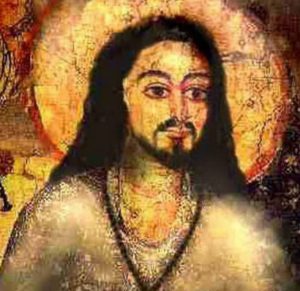 The paintings of Torfan, discovered in the desert of Gall, a region situated in the Turkistan province in China, belong to 840 to 860 AD.

In Achaemenid era and Sassanian era we saw so many great masterpieces of art especially in painting. The motifs were the story of kings, Gods, goddesses, the battle between good and bad, special creatures and trees and plants. 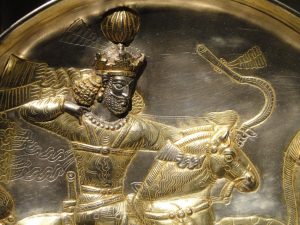 After Arabs invasion many things changed and instead of depicting real faces and shapes the artists had to depict conceptual motifs as depicting faces was absolutely forbidden in Islam.

The first special Iranian school was founded in Baghdad then the Iranian miniature blossomed in 14th century in handwritten books. 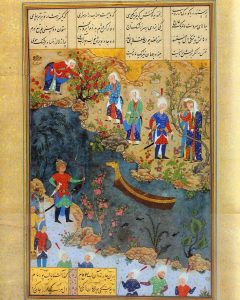 Artists of the Baghdad school, after years, were eager to create and innovate. This particular school had animals and illustrated stories.

Although the Baghdad school is superficial and primitive, the art of Iranian miniature, in the same period, was seen in every region in which Islam was propagated and preached including Far East, Africa and even Europe.

Among illustrated books in the Baghdad style, “Kelileh and Demneh” can be mentioned in which Images were painted larger than normal sizes and are not proportional. Only few colors are used in these paintings. 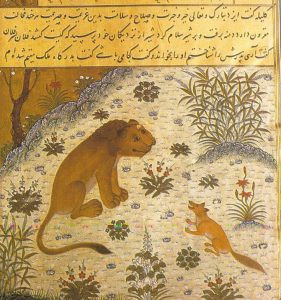 China provided the most important incentive for painting in Iran as There is a link between Buddhist Chinese and Iranian painters.

The most important evolution in Iranian art has been the adoption of Chinese designs and coloring, which were mixed with the specific conception of Iranian artists.

The beauty of Iranian paintings are beyond description. The cover and margins of books were adorned with designs passed on throughout centuries known as the “Art of Illumination” or Tazhib in Farsi. Tazhib and book decoration made its path of progression under the Seljuk, Mongol and Teimurid dynasties. 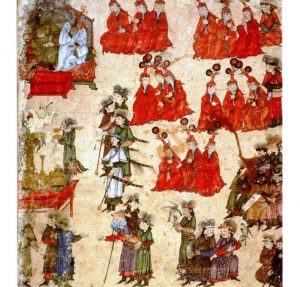 Most of the handwritten books of the 13th century are full of the images of animals, plants and illustrations from fables and stories.

A good example of the most ancient Iranian miniature is for sure the drawings on a book called “Manafe Al-Hayvan” (1299 AD) that describes the characteristics of animals. 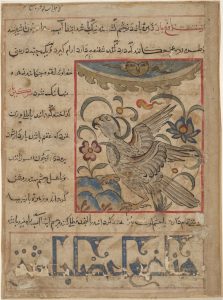 It is noticeable that natural history is narrated through ancient fables. Colors are bright and resemble the old style of the Baghdad school.

After the invasion of Mongols, a new school appeared in Iran. This school was totally influenced by the Chinese and Moguls, where paintings are minute, dry and motionless.

It is interesting that the Mongol emperors, after invading Iran, were totally impressed by the Iranian art and encouraged painters.

Among the characteristics of the Iranian art, subtleties, decorative compositions and fine short lines can be recognized. The style of these Iranian paintings is linear and one-dimensional.

Artists of the Mongol royal court emulated not only Iranian techniques but also their culture. A part of their work blossomed in “Shahnameh” of Ferdowsi the most important book of Persian literature. It’s one of the masterpieces of the Iranian art of painting preserved in the library of Golestan Palace in Tehran. 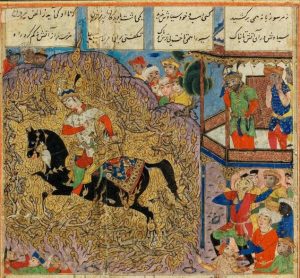 Contrary to Baghdad and Mongol schools, more works remain from Herat school. The founders of this style of painting associated with the Herat school were Teimur’s ancestors, and the school was named after the place where it was founded; Herat in Afghanestan.

Art experts believe that during the Teimurid era, the art of painting in Iran reached a real climax because during this period, outstanding masters such as Kamaluddin Behzad presented a new class of Iranian painting. The Teimurid period was from 1370 to 1405 AD. In this period, the art of miniature and book illumination improved substantially and most famous painters gave life to their work in this period.

The book of “Khamseh Nezami” shows 13 excellent miniatures drawn by “Mirak”, the famous painter and calligrapher. These miniatures demonstrate the sensitive and artistic spirit of Baghdad’s paintings. This precious work is preserved in the British Museum. 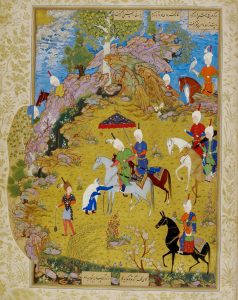 One of the liveliest paintings of this book shows the construction of “Jozanag” palace. In this painting, masters and architects are busy building the palace. This miniature was painted in 1494 in Herat.

Behzad, the greatest painter of Herat School, expanded the excellence art of miniature.

During the Safavid era (16th to 18th century), the artistic center moved to Tabriz and a few artists also settled in Qazvin which were both the capitals of that dynasty. But the Safavid School of painting was finally established in Isfahan. 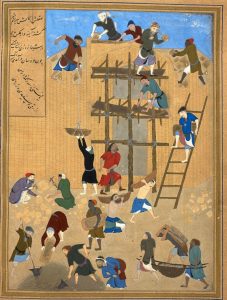 The miniature of Iran in this era was detached from the influence of the Chinese and stepped on a new road. The painters were then more inclined toward naturalism and moved towards pure Persian art.

Reza Abbasi who founded the Safavid School of painting, transformed the art of design, which is one of the most elegant Iranian arts. The miniatures in this scholl was something beyond just decorating the books. The Safavid style is softer in form than those of the Teimurid School. Human images and their behavior are not only vain and artificial but also they are more natural and closer to reality.

In Safavid paintings, themes of the paintings mostly focus on the life in royal court, the nobles, beautiful palaces, scenes of battles and banquets. Humans are drawn with flamboyant garments, handsome faces and glowing colors.

The art of painting, during the Safavid era, expanded both in terms of quantity and quality. In the works of this period, a greater freedom, skill and power can be seen. 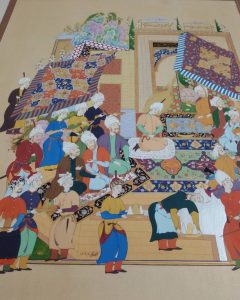 The smoothness of lines, the quick expression of feelings, and condensing the subjects are the characteristics of the Safavid style of painting.

After the end of the Safavid era, perspective and shading, a result of the European style, appeared in the Iranian paintings.

Safavid painters also displayed a special expertise in heural paintings. The most magnificent example of which can be seen in the palaces of Chehel-Sotoun and Aali Qapou.

After the end of the Safavid era, perspective and shading, a result of the European style, appeared in the Iranian paintings due to the presence of Europeans in royal court.

Later the paintings of Qajar period (19th century) showed a combination of the classic European arts and Safavid miniature techniques. 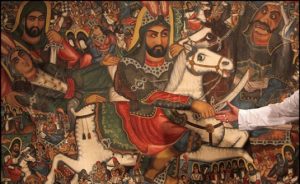 In this era, a kind of painting known as Teahouse painting emerged. This was a new phenomenon in the history of Iranian art. These paintings included the holy images of prophets, religious epics and the battles of the national warriors. Teahouses were used in public places for the ordinary people. In these places, narrators used to tell religious and epic stories from Ancient Persia, religious stories and mostly the stories of Shahnameh.

Artists depicted the same stories on painting boards and the walls of these teahouses.

The most beautiful examples of this kind of painting are preserved in major museums of Tehran, and in private collections at home and abroad. Iranian paintings, through their richness, offer a special joy unlike anything else.