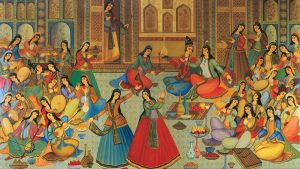 The very antiquity and richness of Persian culture renders the term “Persian dance” both vague and inadequate; it can be applied to a variety of regions, ethnicities and historical periods, making a strict definition difficult.

“Persian dance” can range from sophisticated reconstructions of refined court dances to energetic folk dances.  The movement vocabulary, costuming, music, demeanor, and context of these dances also varies widely. A brief examination of the genres of “Persian Dance” reveals the abundance of diverse dance styles in the Persian experience.

The Persian nation, known today as Iran, has an ancient heritage and once governed a much larger geographical area than at the present. In 500 BC, the Persian Empire once extended to Egypt and the borders of India. Ancient Greek historians mentioned the dance of the Persians and in one account, Alexander  married the Soghdian princess Roxanna after seeing her dance at a banquet.

During different dynasties, various regions and populations fell  under Persian hegemony. For example, the cities of Bukhara and Samarkand are in  present-day Uzbekistan, but each place has a considerable Tajik speaking  population. (Tajik is closely related to the Persian language.)

The  population of Iran includes many ethnicities other than the Persians themselves.  In addition to numerous Iranian tribal groups, Kurdish, Uzbek, Turkmen, Jewish,  Armenian, and others can be found within the borders of modern-day Iran. Each  group, each region, and each historical epoch has specific dance styles  associated with it.

In Islamic society, dance generally suffers from low  social status because it is often associated with immoral behavior not  appropriate for a Muslim, such as drinking alcohol. Professional dancers were  often Armenian and Jews, since proper Muslim girls would never dance in public  before strangers.

Like other areas of the Islamic World, Iran possesses  four categories of dance, as first delineated by Louis Ibsen al-Faruqi. These  genres are chain or line dances; solo improvisational dance; war or combat  dances; and ritual or spiritual dances. As a result, the term “Persian dance” can include all four historical dances, folk dances, urban dances, and  ritualized movement.

Chain or Line dances are often named for the region  or the ethnic groups with which they are associated. These include Bandari,  Ghassemabadi, Qashqai, Kavkazi, Baluchi and Kurdi to name just a few. Bandari is  a lively folk dance from the Persian Gulf region which contains strong Arabic  and African influences. A favorite Ghassemabadi dance depicts women harvesting  in the fields, mimicking work motions. The colorful layered skirts worn by women  beautiful unfurl in their circle dances. With a population of 25 million Turkic  Azeri people in Iran, the Kavkazi dances, like Lezginka, enjoy great popularity.

A mesmerizing Baluchi bracelet dance was once part of the repertoire of  pre-revolutionary Iran’s Mahalli Folk Dance Company. Dance is also central to  celebrations of the Kurdish people with their various distinctive and energetic  line dances.

Urban dances focus less  on communal line or circle dances and more on solo improvisational forms.  Kereshmeh, Baba Karam and Shateri. In these dances, the charm and technical  skill of the performer are foremost. Contemporary social dances performed at  festive occasions like weddings and Noruz celebrations follow in this tradition,  with each dancer interpreting the music in her own special way but within a  specific range of dance vocabulary. More recently, Iranian emigre populations in  the Los Angeles area have experimented with blending native styles with Salsa,  Arabic, and Jazz dance elements.

War or Combat dances are those that  either imitate combat, or help train the warrior. The Shamshir, or sword dance,  belongs in this category. It may be argued that the ritualized movement includes  the famous athletic motions of men from the zurkhoneh of “House of Strength” also are a kind of martial arts training.

Ritual or spiritual dances,  such as those of the Sufis or devishes have been depicted in Persian miniaturepaintings. These dances bring to mind the mystic poetry of Jalaledin Rumi. These  dance rituals are known as sama’ and also zikr.

Certain general characteristics are shared by many folk and urban dances. Hip movements are sometimes used, but are quite distinct from those used Arabic dance. In Persian dance these motions sometimes twisting movements or a gentle hip push are often achieved by moving the legs; this contrasts with the true pelvic isolations of Arabic dance. Although accentuated shoulder isolations appears they are rarely sustained shoulder shimmies with the notable exception of Bandari.

Like almost all of the dances of the East, the floor often becomes a significant element in both Persian folklore and art dances, with a performer kneeling or sitting in part of her presentation. Backbends and “lay backs” can occur. Elaborate and complex spins and spiral turns are found in various Persian dances, going back to the famous spinning dance of the Soghdians. (A  notable exception to the use of spins in the Arab world is the Tanoura, which  may trace its origins to Central Asia.)

Just as the dances of Iran are  unique and varied, so are the costumes traditional to each dance as well as the  music that accompanies them. Certain melodies are inextricably tied to special  dances, so proper musical selection is critical.

Thus, “Persian dance” reflects a tapestry of cultures and a geographical spectrum as broad and as  ancient as old Persian Empire itself. From the joyous abandon of Bandari to the  studied nuance of a Qajar Court entertainer, the wide scope of Persian dance  continues to enchant audiences in the 21st century, and for Westerners, offers a  glimpse into the soul of an ancient people.

Dance has been an inseparable element of Persian culture for thousands of years. Dance depictions on pottery excavated from prehistoric sites attest to the antiquity of this art. However, ritual dance, the precursor to Iranian royal court dances, can be traced back to the cult of Mithra (third century BCE).

During the reign of early Persian imperial dynasties—Achaemenids (c. 550–330 BCE), Parthians (247 BCE–224 CE), and Sassanids (224–651 CE)—ritual dance was adapted into ceremonial practices within their royal courts. A performance of rhythmic human movements enacted in harmony with musical patterns became a regal custom not only because it was used as means of amusement and entertainment in social and ceremonial coherences of the Imperial courts but also because it incorporated high aesthetic and cultural values. That is why even the emperor (shahanshah, the “king of kings”) and his courtiers would gracefully engage in dancing. 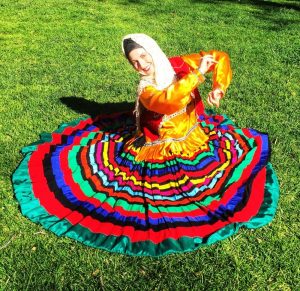 During the Hellenistic period (323 BCE–31 BCE), Greek theatre and dance were adapted to Iranian taste and traditions, especially by the Parthians. Their dance traditions, particularly royal court dances came, in turn, to influence the dance movement vocabularies of nations within a wide geographical area along the Silk Road, from Caucasus throughout Central Asia and India.

The term “Persian dance” was mentioned by several Greek historians of the time to describe ceremonial dances in which Persian royalties participated, such as fire dance, wine dance, sword dance, and dancing on horseback. Through Greece and after the Alexander the Great invasion of Persia, Persian military dance became the heir to what is known today as Lezgian and Cossack dance, widely practiced and performed in Caucasus countries.

The Arab conquest of Iran (633 CE) suspended the traditions of royal court dance. After centuries of political instability, civil war, and occupation by foreign powers, the desire of dance was awakening among Persians who started to express themselves through visual arts. Dance gained esteem and recognition as it was practiced by new spiritual reform-oriented thinkers, called Sufis, as means of connecting to the divine. And thus, dance never disappeared completely from the Iranian cultural sphere, even during the most arduous period of Iranian history.

Dance, as a tradition of royal entertainment, returned to Persian courts when the Safavids came into power (1501–1722 CE). Along with a new political agenda, the Safavids embarked a new era of cultural development, curing which dance returned to the court of Persian kings and found a new movement vocabulary reflecting the beauty of Persian craftsmanship, national diversity, and prosperity. Court dance remained part of royal habits even through the reign of the next royal dynasty, the Qajars (1794–1925 CE). Even though the powerful clergy condemned dance, it continued to flourish and develop and became a popular motif of Persian visual art productions such as fresco and miniature and oil painting. The harem of Nassereddin Shah, the 4th Qajar king, hosted dance performances in which many of his eighty-four wives and a number of his daughters participated. At the time, Shiite law forbade any kind of dance, but the most powerful man in the country had the luxury of breaking religious law.
Reza Shah, the first Iranian king of the Pahlavi dynasty (1925–1979 CE) after the Qajars banned the royal court dance. His political, social, and cultural reforms rejected many customs and traditions of the previous Persian royal courts such as the king’s possession of a harem or “vulgar entertainment.”

With the rise of Reza Shah, Iranian royal court dance developed in two different directions. The first sort, being considered as neither artistic nor cultivating, often expressing sexuality and frivolity, was to be performed in cabarets, social gatherings, and the like for entertainment. This type of dance, ordinarily performed by a solo dancer, was intolerable to be presented before royalty.

The other style, which came to be developed and elaborated into an art form, is today referred to as Persian traditional/classical dance. It is always performed on the base of traditional Persian modal music, dastgah. The movements demonstrate flexibility, grace, and dominance of the upper body moves, and include facial expressions. The dance is nonsexual, feminine, confident, joyful, and active. It displays a sense of pride in behavior and frequently uses literary and historical themes.

The Islamic revolution of 1979 and establishment of a theocratic government terminated traditional court dance, at least on the public stage, mostly because the court dances were mainly performed by females. Political turbulence after 1979, cultural revolution which attempted to erase any sign of Pahlavi regime, followed by an eight-year war with Iraq obliterated the art form of dance for about two decades.

As time passed, former dancers, who were at the time of revolution in their 30s and 40s, started an underground movement to train and teach Iranian traditional dance to a new generation of dancers. Millions of Iranians migrated after the revolution of 1979, creating diaspora communities around the world. Thanks to the efforts of former traditional dance artists and some foreign dancers who specialized in Persian dance, Iranian traditional dance has survived. A new generation of Iranian dancers has emerged throughout the Iranian diaspora communities during the past decade, and they are cultivating the art form and safeguarding it for new generations.

Special thanks to Nima Kiann

The Haft tape of Khuzestan