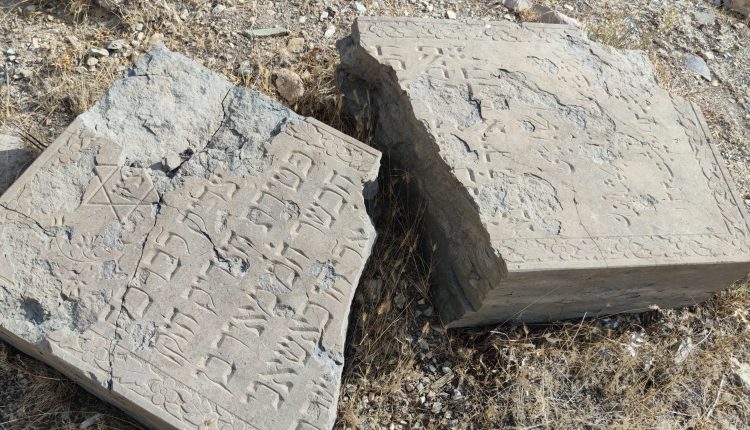 Gilead used to be a meaningful name for the Jews who lived near the city of Damavand. Nowadays there is nothing but a very small graveyard in Gilard or Jilard region in Damavand which tells you a lot of stories about the presence of Jews nearby. There used to be a holy place for Jews who used to visit the tombstones and pray for their dead people but recently not only no one has paid attention to this historical cemetery but also some stupid people has destroyed many tombstones and damaged the whole area.

This cemetery has two parts including the new and old in which there is also a Muslim part. The Jewish part shows different tomb stones having various nice shapes but the Menorah accompanied with two David stars are almost on every one of them. The ornamentation of the tombstones is very beautiful and heart touching.

In the eastern corner there is an arched monument, protecting a nice tombstone that seems to belong to an important person.

Studying history tells us how Cyrus set the Jews free and sent them to Jerusalem but there were so many Jews who used to live in Persia and some others who preferred living in Persia so the Jewish cities, towns and regions were founded and developed in some parts of Persia. Giliard village was one of those places which proves the good relationships between Jews and Persians.

It is said that the Jews in Giliard were the grandchildren of Reuben, Gad and Naftali; the sons of Jacob, who were the first captives in Babylon and were forced to settle down near Damavand.
The Assyrians used to send their captives to long distances in order to destroy their morale.
It is said that the Assyrians sent around sixty thousand Jews towards Damavand as they believe that Damavand is the end of the world.

The shrine of Sheikh Zahed Gilani in Lahijan