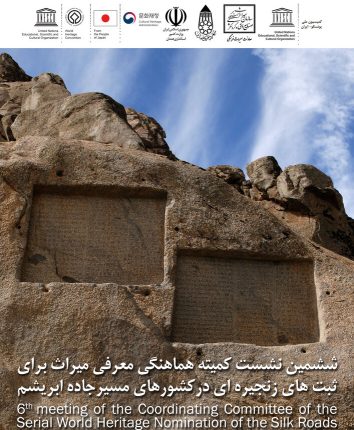 Silkroad; a road to connect east to west....

Organized by the UNESCO World Heritage Center and UNESCO Cluster Office in Tehran in cooperation with the Iranian National Commission for UNESCO and the Iranian Ministry of Cultural Heritage, Handicrafts, and Tourism, the meeting will bring together the National Focal Points and experts from sixteen participating countries of the Intergovernmental Coordinating Committee for the Silk Roads serial transnational World Heritage nomination.

Representatives from Iran, Afghanistan, China, India, Japan, Kazakhstan, Kyrgyzstan, Nepal, Pakistan, the Republic of Korea, Tajikistan, Turkey, Turkmenistan and Uzbekistan, as well as Bhutan as an observer will attend the meeting.

Together with other partner countries, they will review the State of Conservation of the inscribed Silk Roads World Heritage property and the progress made by those countries that participate in the serial transnational World Heritage Nomination(s) Process of the Silk Roads. The meeting also aims to explore further continuation of the ICOMOS Thematic Study covering other parts of Asia and to decide on a strategy for related nominations, the UN cultural body reported.

It will also involve UNESCO representatives and international experts and other international resource personnel, including the International Institute for Central Asian Studies (IICAS, Samarkand) as well as the ICOMOS International Conservation Centre in Xi’an (IICC Xi’an), which acts as the Secretariat of the Silk Roads Intergovernmental  Coordinating  Committee as well as. These resource persons will facilitate discussions and provide technical assistance on the serial World Heritage nomination of the Silk Roads.

The ancient Silk Road has existed for thousands of years, passing through many different empires, kingdoms, reigns and societies throughout history. At certain times in its long history, traders could travel freely along these routes, whereas at others, travel was difficult or dangerous.

According to UNESCO, the Silk Road enriched the countries it passed through, transporting cultures, religions, languages and of course material goods into societies across Europe, Asia and Africa, and uniting them all with a common thread of cultural heritage and plural identities.

These vast networks carried more than just merchandise and precious commodities however: the constant movement and mixing of populations also brought about the transmission of knowledge, ideas, cultures and beliefs, which had a profound impact on the history and civilizations of the Eurasian peoples.

Travelers along the Silk Roads were attracted not only by trade but also by the intellectual and cultural exchange that was taking place in cities along the Silk Roads, many of which developed into hubs of culture and learning. Science, arts and literature, as well as crafts and technologies were thus shared and disseminated into societies along the lengths of these routes, and in this way, languages, religions and cultures developed and influenced each other.

The Prince garden of Kerman