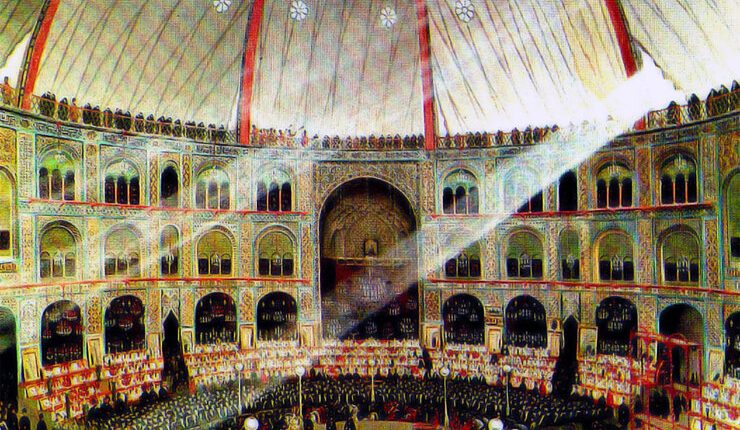 The purpose of meeting is to help safeguard and preserve [the memory of] Muharram rituals that was observed during Qajar era in Tekyeh Dowlat as one of the main centers for the mourning ceremonies [of Tasua and Ashura] and one of icons of ancient Tehran, Mehr quoted Shahrbanou Jahanaraei, director of the museum, as saying.

Being completed in 1868 by the order of Naser al-Din Shah Qajar, Tekyeh Dowlat, literally meaning “State Theater”, was one of the most famous of all the ta’zieh (passion play) performance spaces in the country. It has a capacity for more than 4,000 people.

It is said that American statesman Samuel Greene Wheeler Benjamin believed that Tekyeh Dowlat was comparable to Verona Arena, a Roman amphitheater in Piazza Bra in Verona, Italy.

During Muharram, a part from mosques, each neighborhood sets up its own establishment for the ceremonial processions of the month known as Tekyeh (or Tekkiyeh), which are venues for gathering of mourners known as ‘heyat’ (literally meaning group or delegation) who honor the life of Imam Hussein (AS).

Tekkiyeh (stemming from the word eteka, meaning backup or reliable) was historically a staying place for visiting pilgrims and dervishes who relied on the goodness of the benefactors for daily sustenance. Today Tekkiyehs, however, are specific locations for mourners who meet and participate in religious gathering after which they head out on the streets in groups known as dasteh (literally meaning cluster) to parade a dramatic mourning.

The Prince garden of Kerman

Elamite-era ‘ring of power’ to put on show in Izeh